Brian chats with Dawn Hancock, the founder of socially conscious creative studio Firebelly Design. In the first episode of the Mission Driven Business podcast, you’ll learn the life event that compelled Dawn to create her company at age 25, the grit that led to the studio’s two-decade-long winning streak, and Dawn’s plans for the future.

Dawn defines a mission-driven business as an organization that puts people first, and her studio Firebelly Design has been doing fulfilling that mantra since its founding in 1999. When making decisions, Dawn considers the impact of her business on people — whether that’s the work the studio produces or the clients that Firebelly takes on.

“For me, it’s not to say that profits don’t matter, but it means putting people first,” Dawn said.

She later added, “Profit does matter. It just doesn’t have to be the only thing.”

Starting young can be an advantage

Driven by a desire to create meaningful work and the loss of her father, Dawn founded Firebelly age 25. At the time, she figured she could always get another job if starting her own business didn’t work out. She also had the advantage of few fixed responsibilities, such as a mortgage.

“I had that young naivety,” Dawn said. “I didn’t know what I didn’t know, which ultimately was a huge plus to me.”

Initially, Dawn wanted to make enough to cover her bills, while still being able to be selective in the studio’s clients. More than 20 years later, her focus has expanded to include the wellbeing of more than a dozen people who work with her to create good design for good reason.

Know when to delegate

Dawn had to learn the importance of delegation the hard way. About seven years into running Firebelly, Dawn took on all of the work herself for a big, high paying project. But when Dawn got stretched too thin, Firebelly ultimately got fired from the job. It was at that moment that Dawn learned the importance of relying on her team.

“I have a team for a reason, and I trust them, so why am I not … just focusing on the clients, which is what I’m ultimately really good at?” she said. “That was a big ‘Aha’ moment.”

Since that key learning, Dawn’s role at Firebelly has continued to evolve, and she is now in the process of planning her transition away from the company she founded. Dawn had already been trying to envision the future both for her personal life and for Firebelly, and when 2020 hit, her answer became clear.

“I just had this moment where I realized I can hire somebody to replace myself,” she said.

While Dawn hasn’t found the right person to run Firebelly as of the podcast recording, she is excited about the prospect of delegating her latest role.

“They can see and do things that I probably wouldn’t have,” she said. 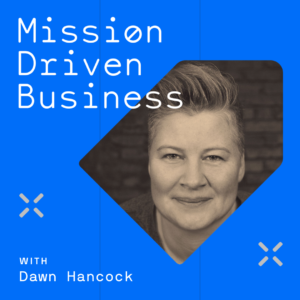