Brian chats with Matt DeLeon and Eric Fruth, the founders of Columbus Running Company. As the first retail entrepreneurs on the show, Eric and Matt discuss how they turned their deep passion for running into a long-running mission-driven business. They also share why community is central to their work and how they have used kindness and determination to overcome obstacles and land major opportunities.

Matt used a distinctive analogy to define a mission-driven business.

“A mission-driven business is like the Earth,” he said on the episode.

Like the core of the Earth, a mission-driven business starts with an inner layer of dense, fiery passion. In Matt and Eric’s case, that passion is a love for running and what running can bring to someone’s life.

The fiery core then creates gravity and attracts things to it, Matt said. On Earth, that means the creation of mountains, deserts, and glaciers. For a mission-driven business, it means resources and people who are attracted to the passion.

“It’s our job to take things that are attracted to that passion … and build with it,” Matt said.

A mission-driven business relies on community.

Eric was a little blunter in his definition of a mission-driven business. He said that, at least for Columbus Running Company, it all goes back to the community.

“We tried to build a business that had, at its core, sort of this moral, ethical belief system that we’ve followed,” he said. “And at the end of the day, it’s all built on a community.”

Columbus Running Company lives this mission by leading a youth running club, timing charity road races, and training people for their first 5K or marathon. Their work has made a real impact on the lives of their customers and the greater community.

“At the end of the day, yes, it’s a profit-driven business. But our goal is to reach out to the community and find ways like that to just improve the world around us,” Eric said.

Kill them with kindness.

Columbus Running Company’s community focus is one of the reasons that Matt and Eric have succeeded for so long, including earning the accolade of the best running store in the U.S. Matt attributes their success to a culture of kindness, which he learned from Eric.

“Eric would sit there and be on the phone and have a smile on his face with kindness,” Matt said. “That’s literally what he did.”

While their kindness may not have always been rewarded immediately, it helped the company to build crucial relationships — some of which are just coming to fruition now. It also helped the duo build a loyal customer base in the competitive retail space.

“If you can win over a difficult customer, you’ve got them for life because no one’s trying to win them over,” Eric said. “It’s all about relationship building and being part of the community.”

Obstacles can be catalysts for growth.

When Matt and Eric opened Columbus Running Company in 2004, they planned to run just one location as a “Mom and Pop” store. But as soon as they opened their doors, a national franchise came into the market that wouldn’t let Columbus Running Company buy their product. This became a problem when consumers came to their store and didn’t understand why certain products weren’t in stock.

To show the public they were serious, Matt and Eric decided to open a second retail location. It proved to be a catalyst for growth, and Columbus Running Company now operates five locations throughout the Columbus area.

“I actually wonder what would have happened if we didn’t have that initial obstacle,” Matt said.

Matt and Eric also overcame obstacles by creating their own events, which is now a hallmark of their business. More recently, they’ve learned how to deliver products in 10 minutes to compete with Amazon.

“At this point we have a fully evolved event management company with its own staff that’s separate from our retail operation,” Eric said. “It’s a wild evolution that the two of us in 2004 would have no idea how to operate the business that we have 17 years later.” 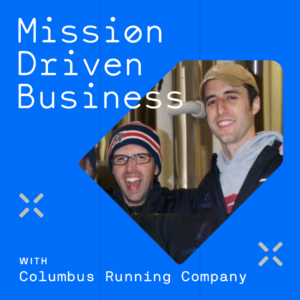